You are here: Home » RecipeTeacher101 » Revolution 180 Toaster Review (with video)

A toaster that costs $349? Seriously? Oh, and it’s on Oprah’s Favorite Things List. So it must be good, right? Well, I had to find out for myself so I took the plunge and purchased one. 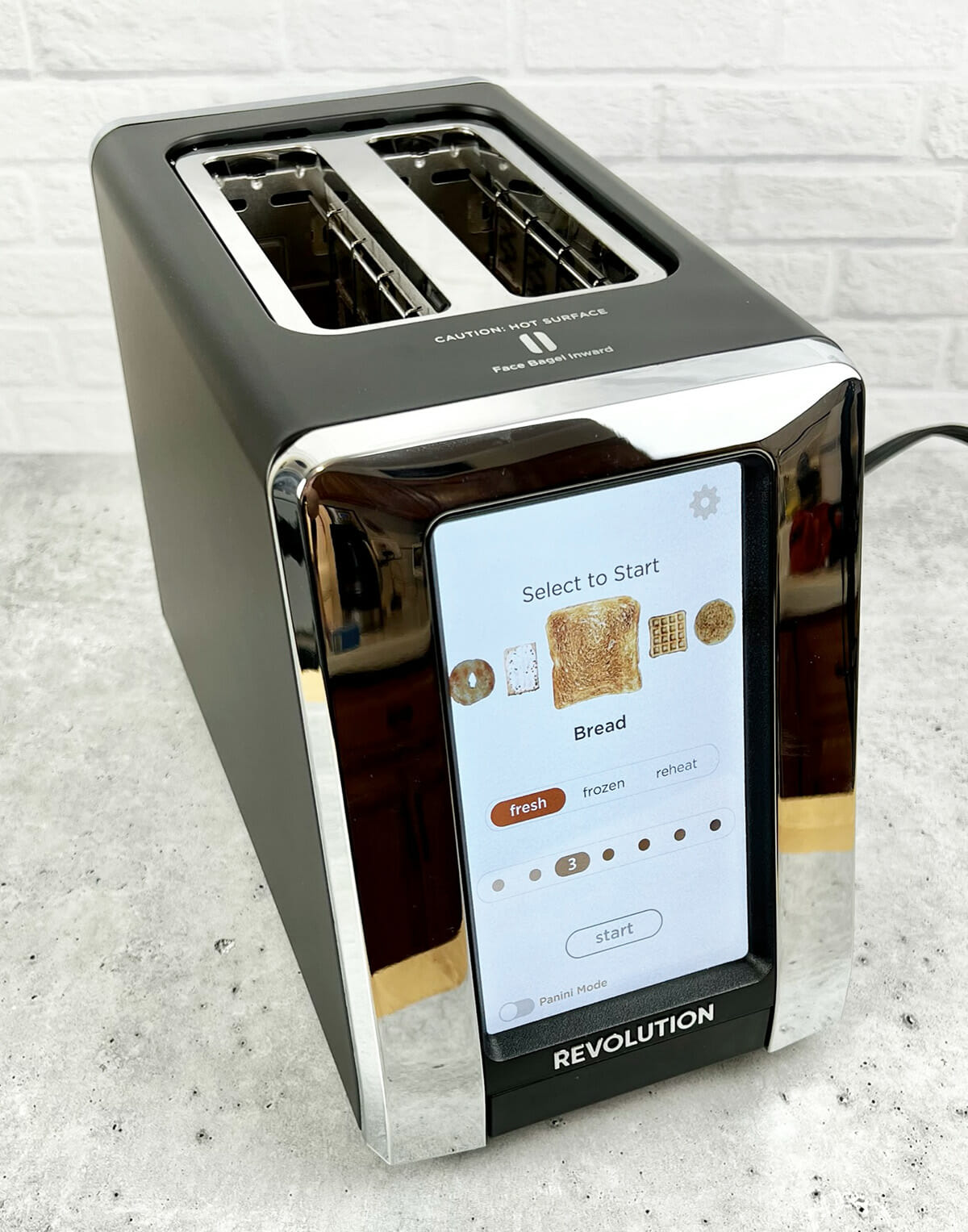 It seems like every basic appliance we’ve known over the years has become “smart” or computerized in some way, often with varying results. We’ve seen grandma’s old fashioned pressure cookers become the Instant Pot craze of the last few years, and we’ve seen all sorts of kitchen gadgets that are supposed to make our culinary adventures easier and better. And now comes along a fancy, “revolutionary” toaster called the Revolution InstaGlo™ R180 Toaster.

The Revolution toaster sits about the same size as a standard 2-slice toaster, with just a bit more bulk towards one end where we’ll find the touchscreen. Once powered on, the touchscreen comes to life and offers 5 food options to be toasted, all with simple images. There’s bread, bagel, waffle, pastry, and English muffin. Below each image we can select the toasting level from 1-7. By selecting the toasting level, the image will change to show a representation of how dark/light that toast level will be. Pretty, cool, right? I think so. There’s also an option to tell the toaster if the food item we selected is fresh or frozen. Another nifty setting.

Once we get past the initial shock from the sticker price, our first question is “how’s the toast?” Well I can tell you that after spending a few days with this toaster, it makes some damn good toast. I’ve had my fair share of toasters over the years. While I can’t recall any particular brand names or prices, I’m certain they were all under $25 as most toasters are. My most recent toaster was pretty standard I guess, but it was very sloooow. I could cook a whole pan of scrambled eggs in the time it would take to toast a bagel. Other than the slowness, I never gave much more thought to the overall performance. But this Revolution toaster is much speedier at making toast, and it makes it quite well. 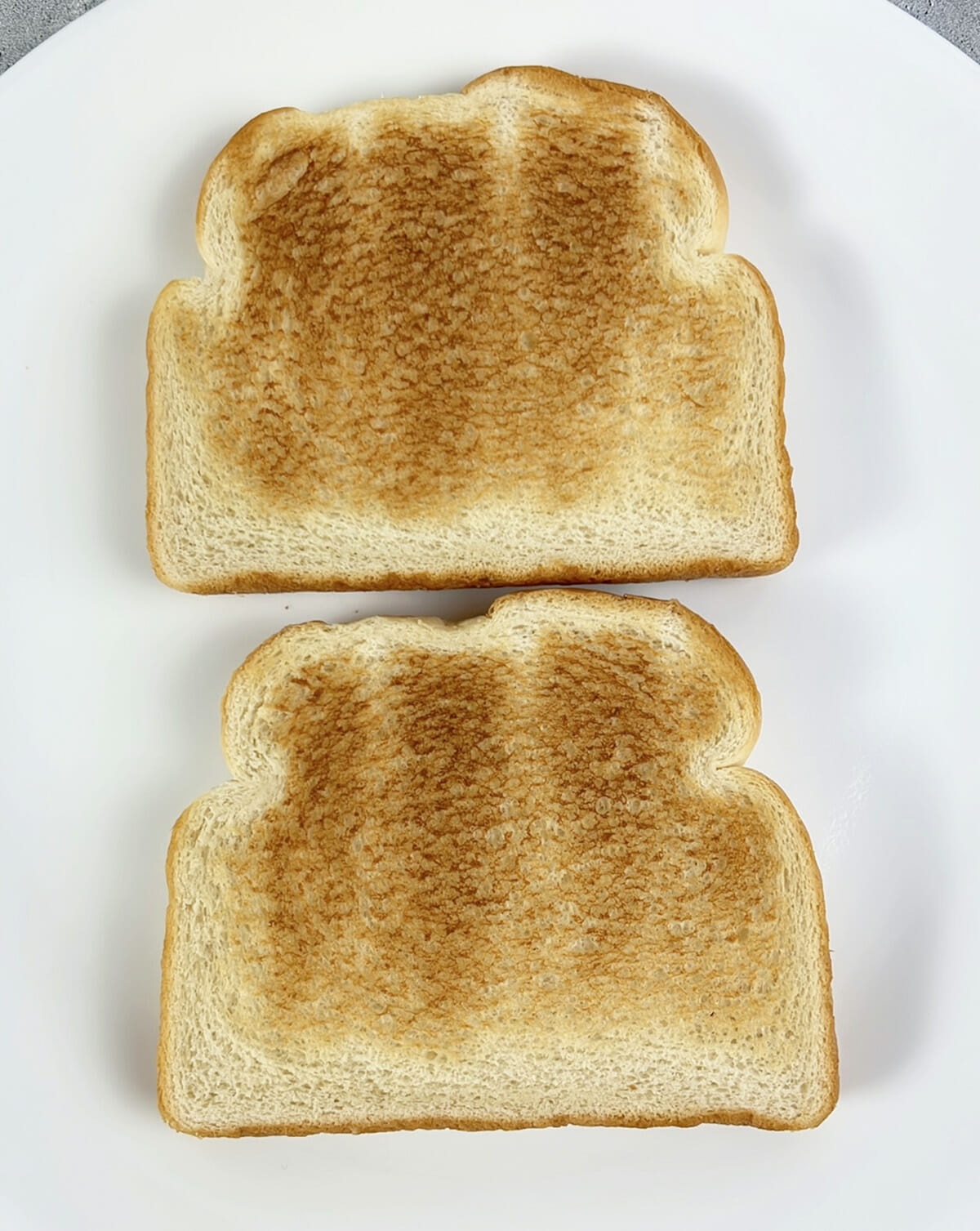 If you look inside most standard toasters, you’ll see that the heating coils or filaments are usually just thin strips which heat up and glow to make the bread toasty. The Revolution toaster has a much more impressive looking network of heating elements which do the job quite admirably. Most slices of bread are toasted fairly even throughout and pretty accurate to the representing toast level. If I had to gripe about the toasting performance, it would be that sometimes the bottom of the slices were not as uniformly toasted as the rest of the slice. Is that a big deal? Well, not for most toasters, but for one of this price, it’s something of note. 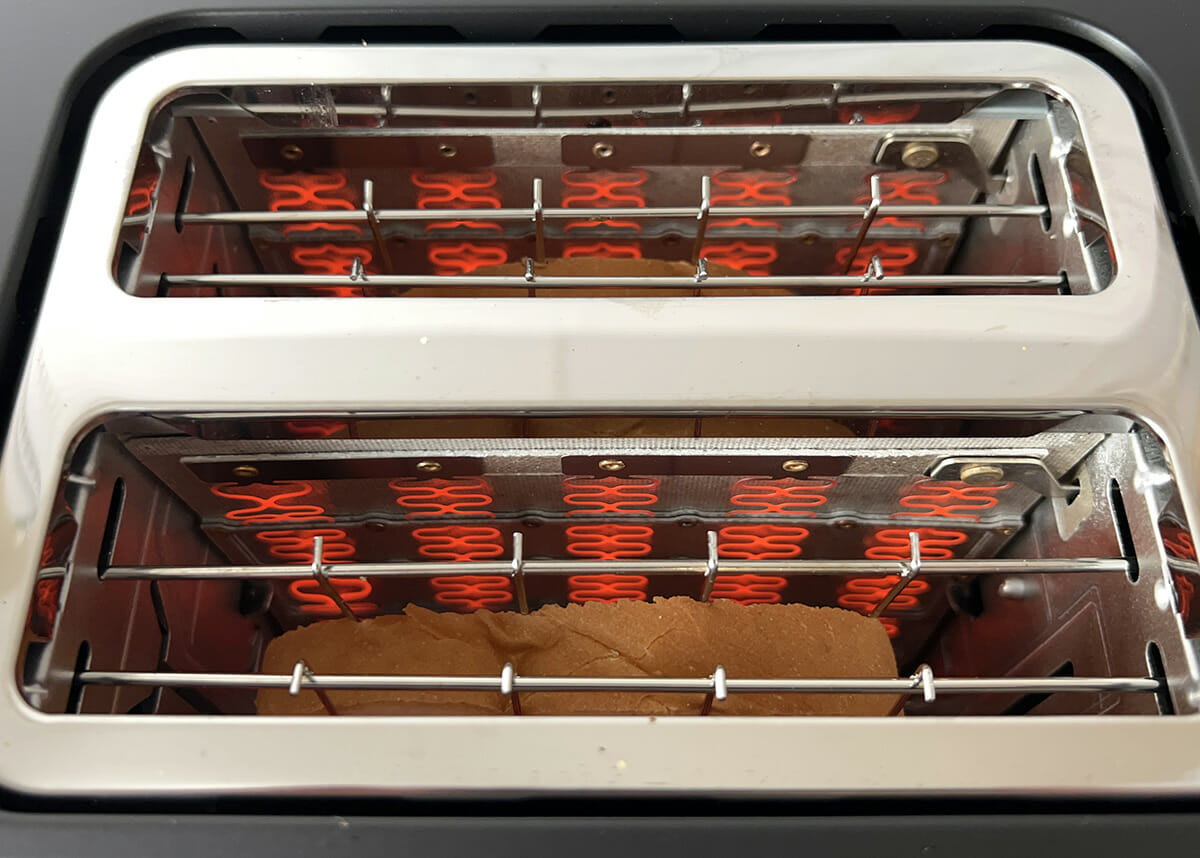 What About All the Features?

As mentioned, the Revolution 180 has 5 food options and 7 toasting levels. I’ve tried all the options and found them to be pretty spot-on. I think one of the most impressive performances was for bagels. Even toasters that have a bagel setting can often be disappointing and take some practice to get just right. Not this toaster. The bagels all came out quite excellent with a very nice crisp. They also toasted much faster than a bagel in my old toaster.

Frozen Eggo waffles work fairly well. I’ll be honest, I don’t have a ton of frozen waffle experience. The last time I made them before now was a few years ago after watching the 1st season of Stranger Things. But, some standard buttermilk frozen waffles, on the middle setting, came out well.

Frozen Toaster Strudel didn’t fair so well in the Revolution and it’s algorithms. I selected “pastry” and the “frozen” option and while it looked great on the outside, it was still near frozen on the inside. To be fair, the Toaster Strudel directions do suggest toasting twice on a low setting. This didn’t help much though as then it became a little burnt.

Pat Tarts were just fine. But really, they’re Pop Tarts and not too much can go wrong.

One of the accessories (which is sold separately) is the Revolution Panini Press. This grabbed my attention right away because I always thought something like this could be a good idea. And I’m a huge lover of panini sandwiches.  Would this panini experience meet my expectations? Admittedly, I knew that this couldn’t possibly make a traditional panini like a standard panini press could. This is more of very simple toasted sandwich press. It can only take standard sized bread, and don’t plan on piling the meat too high for these paninis. You can fit a few slices of meat and cheese, but that’s about it. Again, I assumed this was all the case just by looking at the contraption.

After loading up a couple of slices of bread with some meat and cheese, the press goes into the Revolution 180 and you select “bread” in panini mode. For my first try I went with the middle “4” setting. The result was a sandwich with some lightly toasted bread and nice lines on it. While the cheese wasn’t completely melted throughout, it did the job ok. 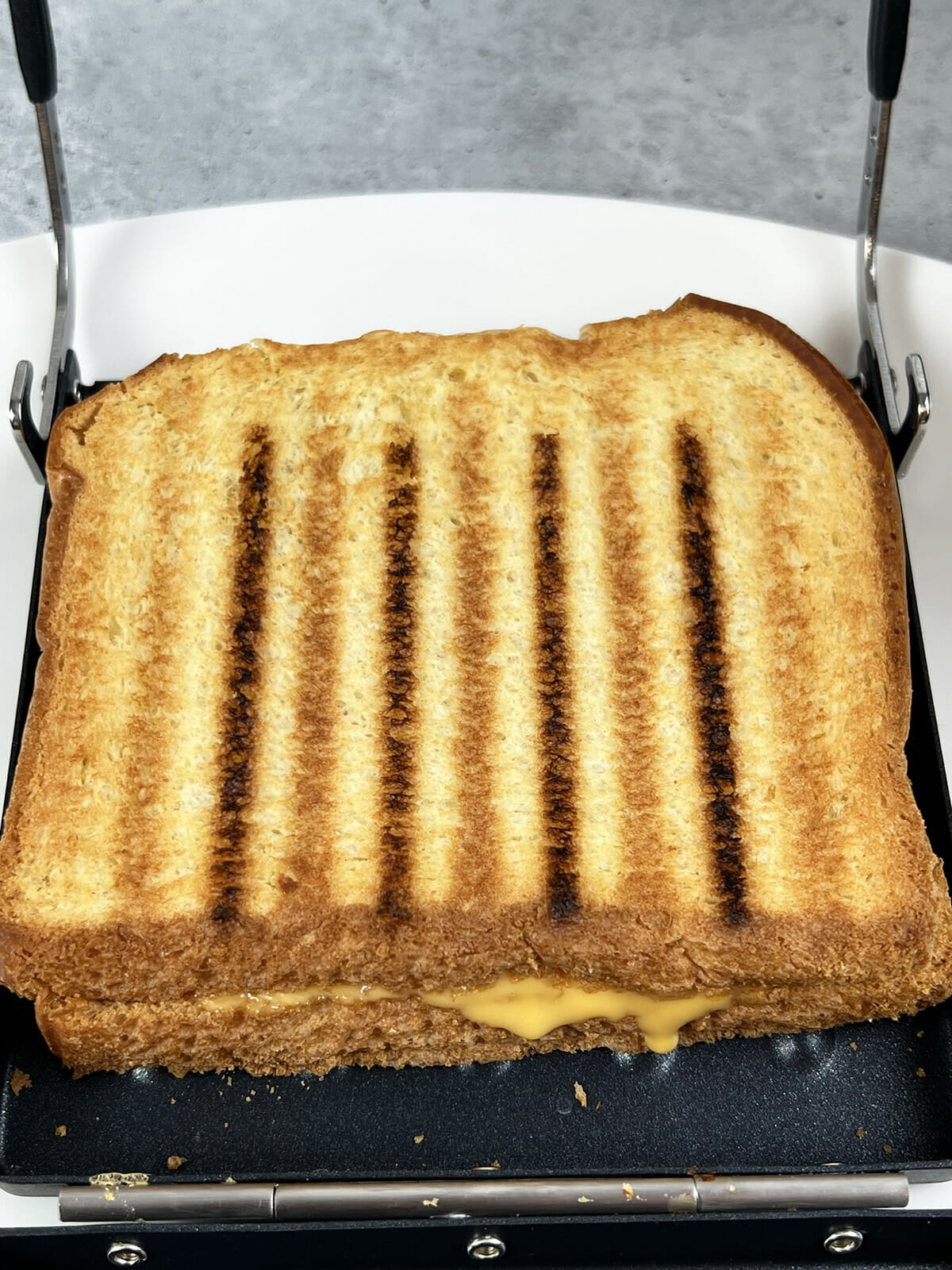 The biggest deal with this panini press is the price – $79.99! Are you kidding?! We haven’t even discussed the price of the toaster yet, but this panini thing is WAY overpriced. You literally can get a real, stand-alone actual panini press for less.

Back to the toaster, my biggest complaint is a pretty big one. A device this premium, of this price, should absolutely be able to connect to the internet for updates, additional features, or even to set the clock. This toaster does none of that. It can’t do it because there is no internet connectivity of any kind. Want more features? You’ll have to pay another $50-$100 for the next model up – the Revolution 270. The 270 appears to be the exact same toaster but with more features and food types in it’s onboard computer. Couldn’t this have just been done by adding internet connectivity?

Let’s talk about the elephant in the room. This toaster retails for $349.99. That’s one hell of an expensive toaster! We’ve all gotten used to premium electronic devices the past several years. Most of our phones come in nice packages and feel sturdy and well-built. The packaging of the Revolution 180 is decent, but the toaster feels less than a premium product. I honestly have no idea how long it will last. It’s built fine, I guess. But it doesn’t have the look feel of premium plastic or the sturdiness you might expect. This was actually quite surprising.

Should You Buy This Toaster?

This is a really tough one. Here’s the thing, I purchased this because I like technology, I like gadgets, and I run a recipe website. I figured that if it sucked, I’d simply send it back. That was kind of the plan anyways. But I’m not sending it back. I like it. I actually like it and I like that overpriced panini contraption too.

Look, Oprah likes it so it must be good, right? Well, aside from Oprah’s opinion, I think the Revolution 180 might be on to something. The idea of a premium toaster with a nice, bright, colorful touchscreen is a good idea. A toaster that’s more than just a fancy light bulb for toasting bread is a good idea too. I think the Revolution InstaGlo™ R180 Toaster is a step in the right direction. The lack of internet is absurd and close to a deal breaker. Despite this, it’s a nice toaster and makes really good toast.

Check out the Revolution 180B Toaster Here