You are here: Home » Desserts and Sweets » How to Make Apple Pie Roll Ups

This recipe goes by many different names: Apple Tortillas, Apple Pie Taquitos, Apple Enchilada just to name a few. When I first heard of this recipe I was skeptical. How could apple in a tortilla be tasty? Well, trust me, this is one of the most delicious dessert recipes you’ll probably ever make. You really won’t believe it.

The flour tortillas don’t taste like tortillas at all. It’s more like a delicious pastry to wrap up the sweet apple filling and to host an awesome topping of the cinnamon and sugar. Honestly, you’d hardly know it’s an actual flour tortilla.

The whole recipe is simple ingredients which include canned apple pie filling, flour tortillas, cinnamon, sugar and butter. After it’s put together and comes out of the oven, it’s a delectable treat that you simply can’t believe. I know i’ve said that a couple of times now but it’s so true. 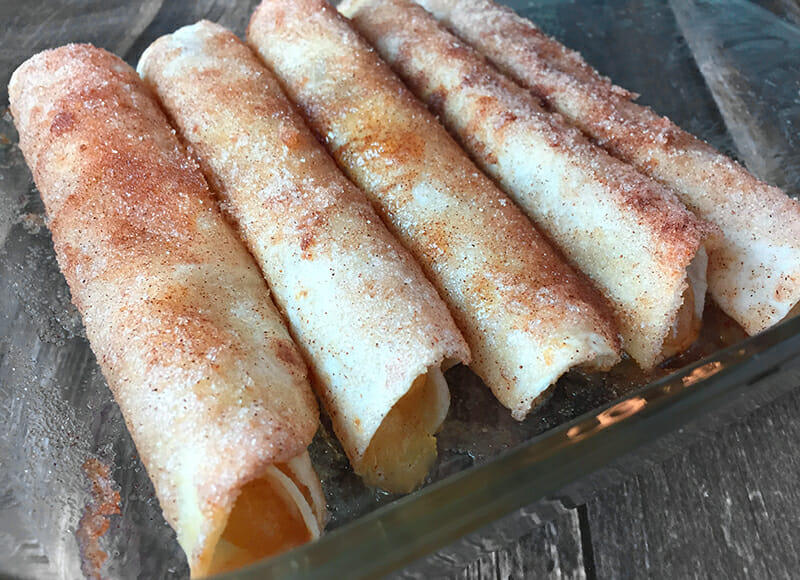 You can enjoy these served just the way they are and you’ll love them. Or serve with melted caramel drizzled on top which is amazing! You can also add some vanilla ice cream or whipped cream. The possibilities are pretty endless.

This recipe will make a dozen Apple Pie Roll-Ups. Most tortilla packages come in 8, 10 and 12, so whatever you’ve got, you’ll be good with. Use the medium size, which are generally 8″.