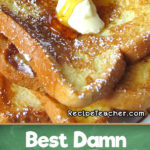 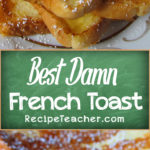 Want to make restaurant quality French toast at home? We show you how with just a few simple ingredients.  No need to deal with a crowded breakfast diner on a weekend morning. Enjoy classic French toast in the comfort of your home and impress everyone with this easy recipe!

What is French Toast?

French toast is a classic breakfast dish in which slices of bread are soaked in a mixture of egg and milk (sometimes called custard), and then pan fried until golden brown “toasted”. It is typically served with syrup and powdered sugar. often times is is accompanied fresh fruit such as berries or bananas. Spices such as cinnamon or nutmeg are sometimes added to further accentuate the sweet qualities of the dish.

The best ratio of milk and eggs

I’ve found that the very best ratio of eggs and milk is 4 eggs for 1 cup of milk. This gives you a delicious French toast that’s fluffy and rich in flavor. Whole milk will give you an excellent mixture with full flavor. Milk with much less fat or skim milk can be a little thinner but will still work. Or you can go even thicker by using half and half. But for this recipe, let’s go with the most common whole milk or 2% milk.

Brioche is the perfect bread for French toast. It’s soft and fluffy, while having a density that hold up very well to the egg mixture. It’s sweet taste and golden color are also the perfect compliments for an excellent French toast. It’s important that the bread not be too thin, so a white bread such as Texas Toast is another excellent choice. Texas Toast is thickly sliced bread that’s commonly used for breakfast recipes or to accompany BBQ style dishes. Challah is a natural for French toast. Similar to brioche, it’s slightly sweet, pillowy, and gets a nice golden toastiness. And don’t be afraid to give French bread or Italian bread a try. Both are very hearty and hold up well with the liquid egg mixture.

The secret ingredient is…

Vanilla extract is the secret ingredient that give French taste that extra richness we know and love. Vanilla extract is very common is many baking recipes. While having a subtle vanilla flavor, it also help accentuate the other natural flavors.

Start by mixing the eggs, milk and vanilla extract in a large, wide bowl. Make sure the bowl is wide enough so that we can dip our bread. Use a hand whisk or fork and mix it really well. You want it to be airy and almost frothy.

Next, have your pan ready. Use a good skillet, griddle or frying pan and melt the butter over medium-low heat.

Dunk your slices of bread into the egg mixture for about 5 seconds each. Remove from the mixture and place directly into the pan. Each side will cook for about 2 minutes each or until golden brown.

Now it’s time to enjoy our French toast with some delicious toppings. Have you ever had real 100% pure maple syrup? Not the kind of syrup that says “pancake syrup”, but rather 100% maple syrup. It’s a game changer. After you plate the toast, add a pat of butter or margarine, followed by the syrup, and finally some powdered sugar. A great idea for adding the powdered sugar is to put some in a salt shaker. This way you can just add a few dashes to sprinkle nicely on top. A flour sifter also works well for powdered sugar.

How to store leftover French toast?

French toast can be stored in an airtight container or plastic bag for a day or 2 in the refrigerator. Don’t go longer than a couple of days. You can also freeze it in a sealed container or plastic freezer bag. Just make sure to use a piece of wax paper in-between the slices.

How to reheat French toast?

The simplest way is to, of course, microwave. It won’t take very long. About 1 minute for refrigerated and about 2 minutes from frozen. You can also place them on a cookie sheet in the oven at 400°(F) for about 4 minutes per side.

My favorite way to reheat French toast is in the air fryer. 400°(F) for just a couple of minutes and we get some good crispiness!

Other breakfast recipes to try

Now that you’re the star of breakfast time with our French toast recipe, why stop now? Let’s get that breakfast table filled with some more awesome food!

Have you ever had a frittata? Oh my goodness they’re amazing! It’s like a little quiche but without all the work. In fact, I have great frittata recipes for both the air fryer and the Instant Pot: Easy Air Fryer Frittata, Best Damn Instant Pot Frittata. They are perfect to accompany our French toast.

How about some bacon? I mean, naturally a side of bacon with French toast makes a complete breakfast, right? Maybe you’ve never been too comfortable dealing with the mess of making bacon the traditional way. Use your George Foreman Grill to make perfect bacon!

And if you want a French toast variation that’s on the sweeter side, try our Cinnamon Roll French Toast. Wow, just wow… it’s a little thicker, loaded with cinnamon and topped with an easy cinnamon roll icing you know and love. This one is a huge hit with the kids!

All contents are copyright © 2020 by recipeteacher.com. No images or recipes may be used without expressed written consent.